I first learned about Paul Gilbert when he was with Racer X during the 80’s.  I hated 80’s pop and since I was toying around with a guitar during that time, I started educating myself with the shredders.  Yngwie was starting to make his mark with Alcatrazz, following up quickly with Rising Force.  Steve Vai was making his impression with Frank Zappa and Tony MacAlpine was beginning to surface.  I was following Eddie Van Halen,  Randy Rhodes and Ozzy, The Scorpions and Judas Priest so the transition to the shredders was natural.  Unfortunately, I was never driven to become a great guitarist and therefore I eventually lost interest in following the shredders.  There may be a twinge of regret about that after all these years!

As the 80’s came to a close, I pretty much gave up the guitar.  I sold my amp, pedals and my Squire Strat only because I needed the money at the time. And that was that!  It wasnt until I moved back home in the early 90’s when I would buy my next new guitar and amp.  But the same mentality followed me.  Playing guitar became a form of therapy so I never took it seriously.  And besides, I never had any interest in forming or joining a band.

I met Seb when I became the Entertainment Manager while working for the Seneca Gaming Corp.  He is the owner of Audio Images out of Rochester and they provided backline for a majority of the bands that came through.  Seb is a bit low key and soft spoken but we managed to spark up a conversation one day as we were prepping the stage for an incoming band.  This is when I learned he was one of the guitarists for Overkill and Anvil!  But like I previously stated, I kinda lost touch with the shredders and didn’t really follow those bands anymore.  I had to laugh when he informed me that Paul Gilbert had been one of his instructors when he attended GIT in LA, he stated that he thought it was funny learning to play guitar from some kid that was younger than him.  I told him I had been a fan of Racer X and enjoyed Mr Big, but hadnt really followed Gilbert or any of the current shredders.  Only recently have I started getting back into the who’s who of old school and I’m finding the opportunity to get myself reacquainted with my old guitar heroes, including Paul Gilbert.

For 3 nights, Paul Gilbert sold out the Iridium in Central Manhattan in preparation for a national onslaught for his upcoming 19th solo album, “Behold Electric Guitar”. Unfortunately it was a night of mixed emotions, half of the crowd wanted the shred; the Frenzy, the Scarified, Technical Difficulties and other notable shreds. But tonight was different as most shows are at The Iridium.  The Iridium allows such artists to venture out and explore other avenues of their music.  Although Paul danced his fingers over his fretboard effortlessly, it wasnt a shredfest as much as it was an exploration of a new path and perhaps a clinic on how he writes music.  He also took the time to do a few covers such as “Rock Around The Clock” by Bill Haley and the Comets as well as “Little Wing” and “Red House” by Hendrix.  Another such let down for some was the lack of the Makita hand drill which has been in his repertoire for years.  People do like their gimmicks!

Backed by top notch musicians in their own rights including, Roland Guerin on Bass, Asher Fulero on Keyboards and Bill Ray on Skins, they teamed together to complete the lecture faculty for all to be schooled!  Class was indeed in session.  Performing highlighted tracks from “Behold The Guitar”, complete with sidebar and cliffnotes, Gilbert took advantage of the intimate setting that the Iridium offers.  Not quite sure how these shows will compare as he progresses through this tour onto other lecture halls and concert venues, but we can all consider ourselves a graduate from Gilbert University as we stand in ovation as our valedictorian leaves the stage as he heads to the city.  Even if he is younger than us all!! 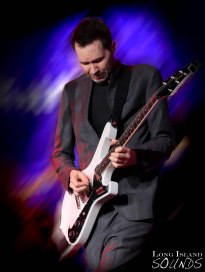 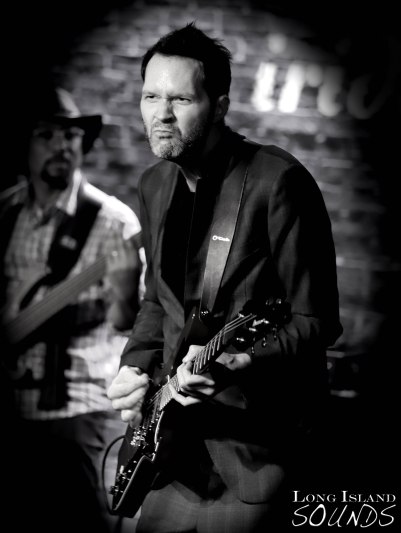 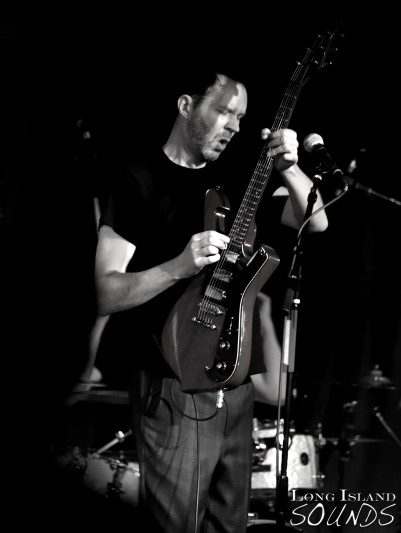